More and more in recent times there have been concerns about a possible recession hitting the US economy.

But what does the data actually say?

In this analysis, I go through a number of macroeconomic indicators, to try to get a more complete picture of the US economy and understand whether a recession might indeed be just behind the corner.

One of the most talked-about indicators of a potential recession is an inversion of the yield curve. This is measured as the difference between the Treasury constant-maturity rate on 10-year and 2-year notes. 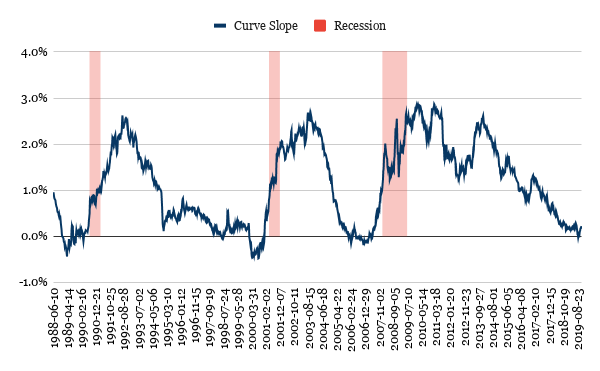 Historically, this indicator was quite accurate at predicting recessions. It is no wonder then that panic quickly spread when the yield curve inverted earlier this year.

However, as I’ve already thoroughly discussed in a different piece, this particular inversion does not seem to be of particular concern. In actual fact, it was significantly shorter than those that actually preceded a recession.

This situation seems more closely related to what we experienced in 1998, with a brief inversion which quickly reverted, followed by years of economic expansion.

Therefore, the yield curve does not seem to be pointing towards a recession.

It is possible to see how historically this measure has been a leading indicator of recessions in almost all occasions. 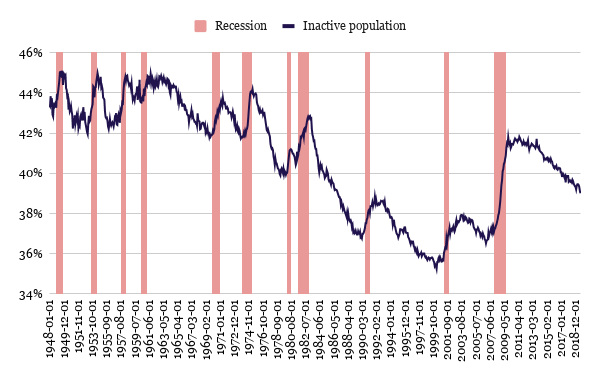 At the moment, the labour market appears quite strong, at least according to this metric. The proportion of inactive population has in fact been on a steady decline, and there are no signs that this trend is about to revert anytime soon.

Historically, house prices in the US have always been very resilient, with the only exception being the 2007 financial crisis. 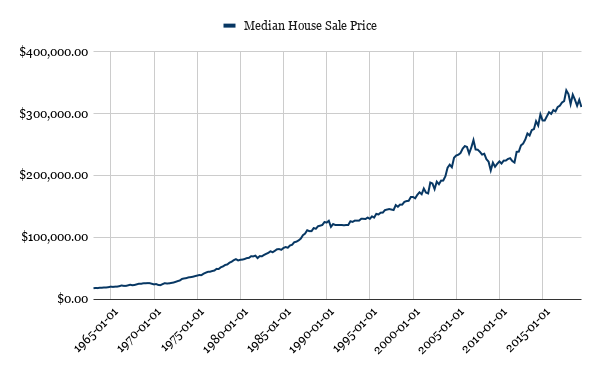 I was therefore quite surprised to see the median sale price on a downtrend. This seems to be a very strong signal of an economic slowdown and should not be taken lightly - especially considering how devastating things got the last time house prices declined in the US.

Given this, I tried to dig deeper into this decline. The first item I looked into is private housing starts. 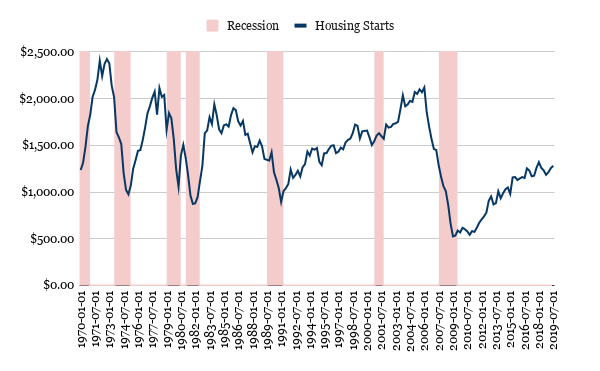 This indicator has usually performed relatively successfully at anticipating recessions, with the only mixed signal being given around the dotcom bubble. At the moment, housing starts have somewhat slowed down, but are still on the rise, suggesting that the economy should still be fairly strong.

Given this, I then moved on to the mortgage market.

The other side of the medal to house prices are delinquency rates. 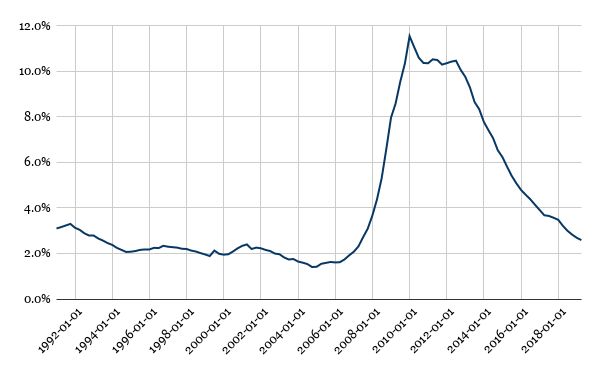 It must be noted that the delinquency rate on mortgages is still above the very modest levels it experienced in the early 2000s and throughout the 90s. However, the picture it paints appears still quite strong, with delinquencies on a steady decline path. Nonetheless, it will be important to keep monitoring this metric in the coming months, together with house prices, to see how the situation evolves.

At this point in time, delinquency rates seem to show a very healthy economy.

The last variable that I considered in my overview is vehicle sales. 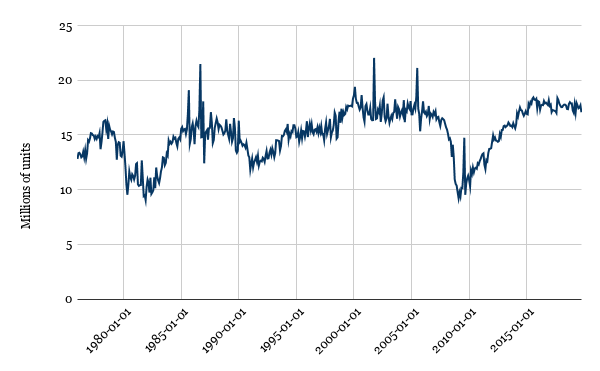 Historically, this has again been a quite good indicator of an economic downturn. This makes sense, considering how vehicles are high-value, depreciating, durable goods and, therefore, a purchasing decision can be quite easily postponed by consumers.

The data in this space points towards a stable picture, with sales not growing, but rather constant. This is, broadly speaking, a positive signal, as the current level is in line with the historical maximum for the market and sales do not appear very volatile at this point in time.

The picture becomes more complex when including motor vehicle loans in the picture. 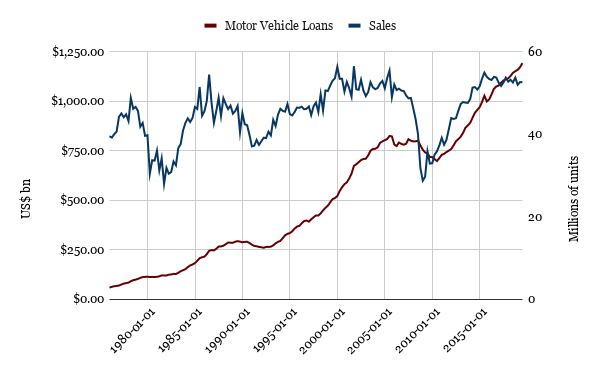 Vehicle sales have definitely grown at a higher pace compared to loans from 2009 to mid 2015, which was a positive. This trend has inverted since then, with new sales relatively flat and loans increasing. This is not necessarily a negative, as a similar trend occurred from 1993 onwards and didn't cause any issues for a substantial amount of time.

So far, new loan origination still appears strong, with no signs of a slowdown. This would normally be a positive signal, as loans too tend to anticipate the business cycle. However, in this particular case, this is potentially a cause for concern, as 90-day+ delinquencies on these loans have been on a steady increase since 2015 - which is also the year in which sales flattened. 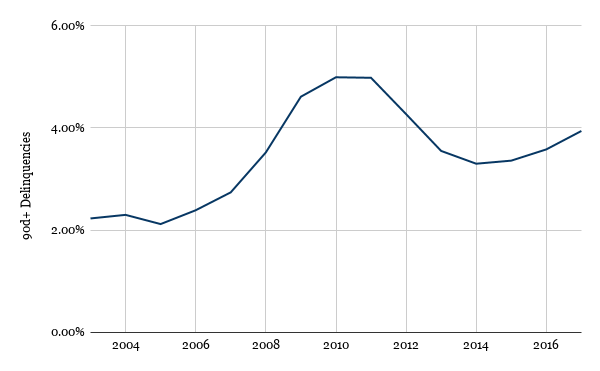 This supports the idea of a weakening motor vehicle market, sustaining itself solely on new loan originations, of lower and lower credit quality.

All in all, this market could be pointing towards a potential bubble building up and should definitely be closely monitored.

So, what does this mean for the economy? 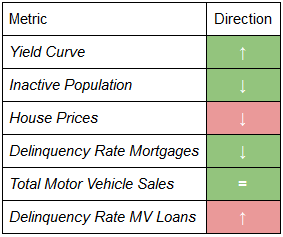 Overall, the data paints a positive picture for the US economy, but with some significant question marks.

The labour market still appears to be very strong, with inactive population on a stable declining trend. The inversion of the yield curve also looks like a minor bump on the road and, when compared to previous inversions, does not seem a particularly concerning sign.

However, things are a bit different when we look at the housing and motor vehicle markets. As for the former, house prices have been on a declining path for the first time since the financial crisis. Nonetheless, housing starts are still robust and so far there hasn’t been a contagion to mortgages, with delinquencies still improving.

As for the latter, almost the exact opposite holds true. Motor vehicle sales have been relatively robust, albeit flat, for the past 4 years, at around their historical record. However, this seems to be sustained almost entirely by an increase in lending, with questionable credit criteria, which has translated into higher delinquencies. This space should definitely be closely monitored, as there seem to be the right conditions for the formation of a bubble.

Considering all the available data, it does not appear that a recession is upon us, after all. However, a lot more focus should be put on the auto market, which seems to be showing some cracks.